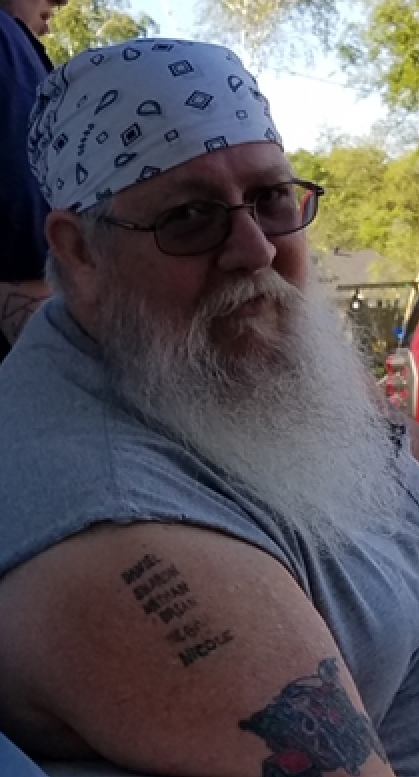 Mr. Ardie Cleo "Mad Hatter" Rose, beloved husband, father, brother, grandfather, and friend, passed away May 17,2021. Ardie was born September 16, 1954 in Grant Michigan to Ms. Shirley Rose (Casler) and Mr. Clare (Ace) Rose. Ardie was preceded in death by both his parents, his stepfather Clarence (Skip) Jewett, and his sister Anna Waynick (Rose). Ardie is survived by his wife of 23 years, Penny Rose (Scott), Son Daniel (wife Brenda) Rose of Gurnee, IL, daughters Angie Scott of Muskegon, MI, Annie Ryan of Muskegon, MI, Son Nathan Rose of Muskegon, MI, daughter Jamie (husband Jeff) Huffman of Muskegon, MI, daughter Nicole Rose of Muskegon, MI, and son Brian Rose of Muskegon. Ardie is also survived by sister Debbie Tadlock (Rose) of Muskegon, MI, Tammy Duffman(Jewett) of Shelbyville, IN, and brother John Jewett of Muskegon, MI, and several grandchildren, nieces, nephews, and close friends.
Ardie spent most of his time with his family but he was also an avid outdoors man, and loved working on motorcycles. Professionally, Ardie was a retired welder from SAF Holland, and he was also a proud veteran of the United States Marine Corps. Prior to becoming ill Ardie also spent time volunteering for various organizations such the local Marine Corps League, of which he was also a life member, Veteran's Pinner of Hope. ne of his favorite was dressing up in a Santa Clause suit and visiting the local veteran's retirement homes.
There will be no funeral service. A memorial will be held on Saturday May 29, 2021 at 12:00 pm, at Veteran's Memorial Final Approach Park, Muskegon, MI. The park is located on the South East end of Mona Lake between Old Grand Haven Rd and Business 31. A reception for the family will be held after the service at The Marine Corps League #703 Bunker which is located at 371 W. Broadway Ave, Muskegon Heights, MI.
In lieu of flowers donations can be made using the gofundmepage created. https://gofundme/367325d6.

Plant a tree in memory of Ardie Cleo

There are no tributes yet.

We encourage you to show your support by adding a tribute above:

The attached photos are added to the memorial of Ardie Cleo "Mad Hatter" Rose to help share their legacy.